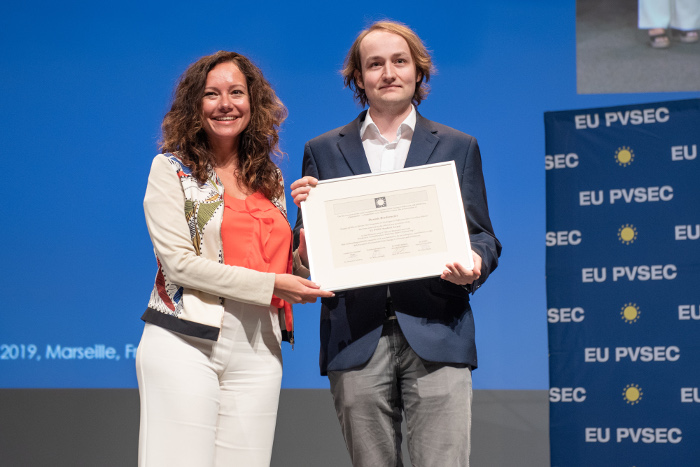 Dr. Florence Lambert awards the EU PVSEC Student Award 2019 to Dennis Bredemeier. Photo: © EU PVSEC
From 9 to 13 September the 36th European Photovoltaic Solar Energy Conference (EU PVSEC) took place in Marseille. The ISFH was prominently represented at the conference. Dennis Bredemeier’s contribution to the entry of hydrogen in crystalline silicon won the EU PVSEC Student Award. If hydrogen-rich silicon nitride layers are deposited on silicon and subjected to a temperature treatment, part of the hydrogen contained can penetrate into the silicon volume and passivate recombination-active defects. In his contribution Dennis Bredemeier showed that the amount of hydrogen introduced into the silicon volume can be correlated with the properties of the silicon nitride layer, especially with the atomic density of the layer. In addition, he was able to show that the amount of hydrogen introduced also correlates with the strength of Light and elevated Temperature Induced Degradation (LeTID). LeTID is a degradation mechanism that particularly affects highly efficient and low-cost solar cells on multicrystalline silicon and can cause severe efficiency losses in the field. Dennis Bredemeier found that the more hydrogen is introduced into the silicon volume, the more pronounced the degradation is. On the basis of these results, recommendations could be given for the adaptation of process steps to avoid the occurrence of the degradation phenomenon. ISFH was represented at this year’s EU PVSEC with a total of nine contributions.