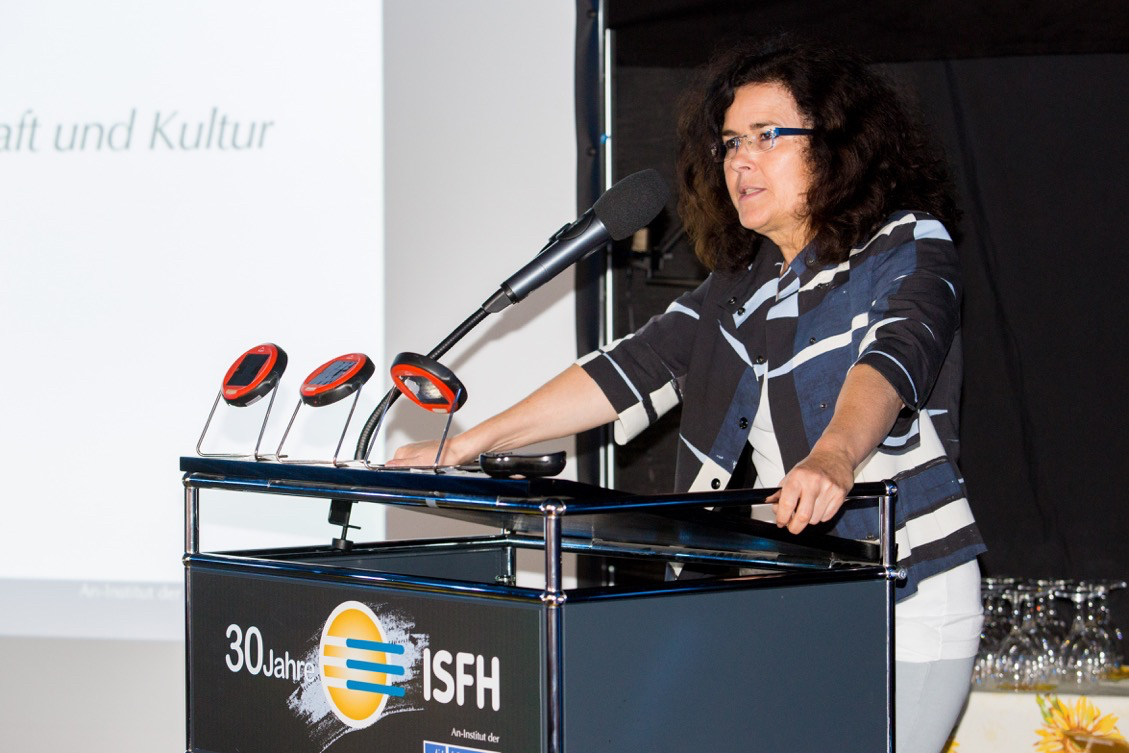 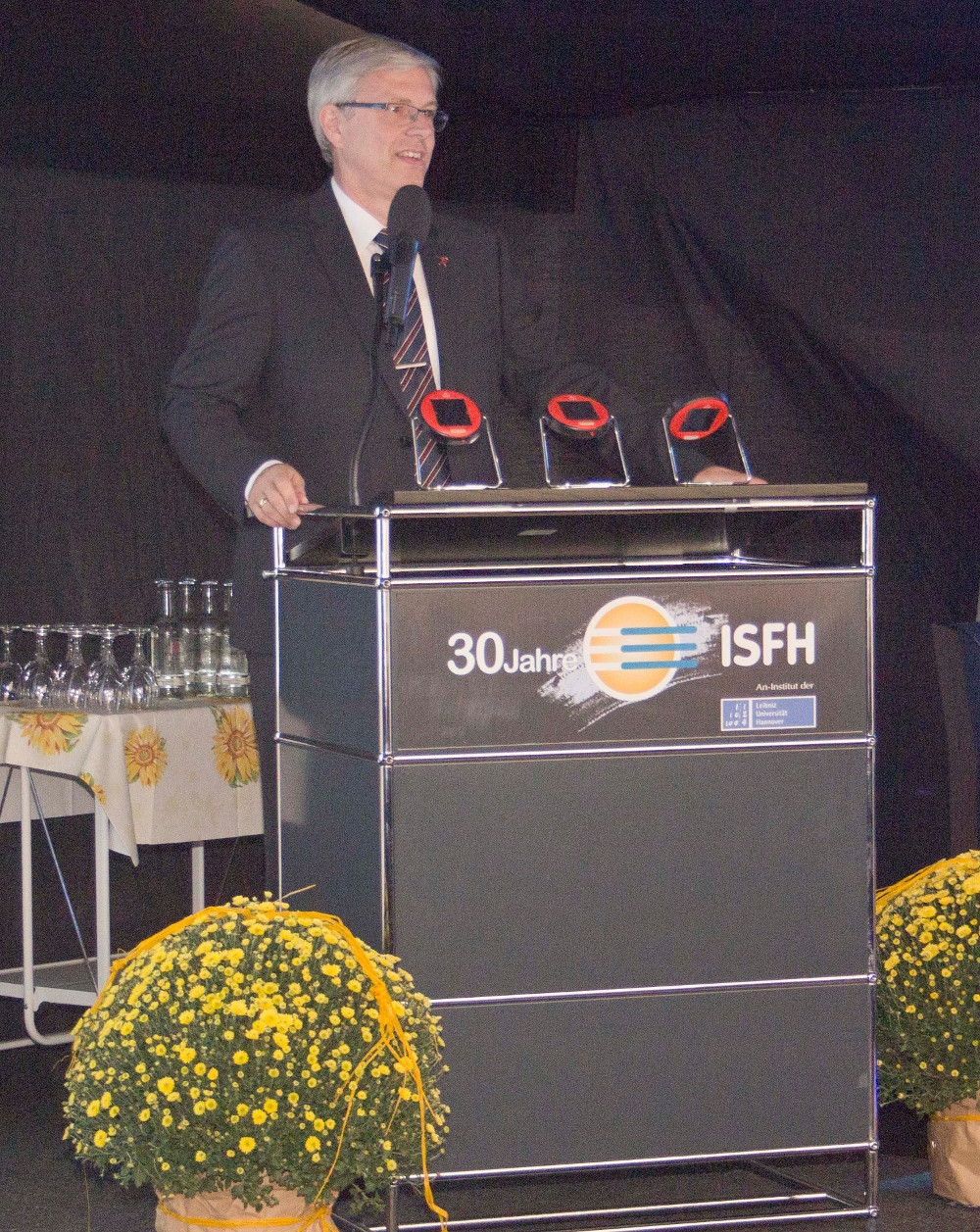 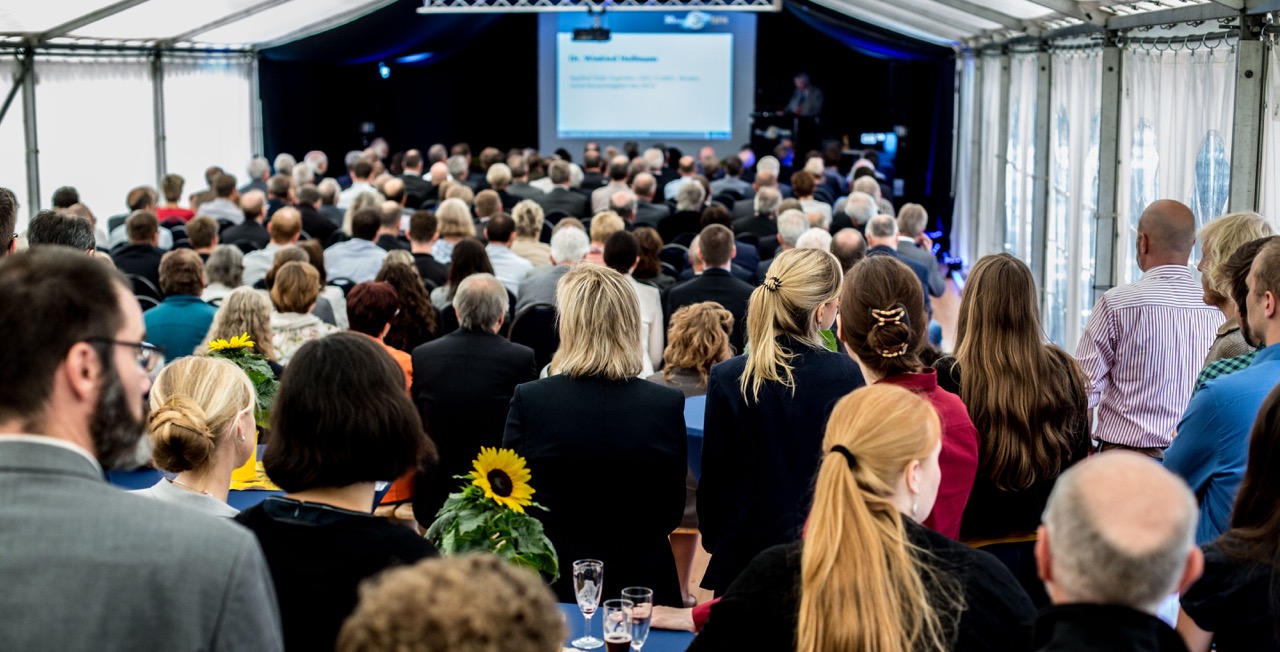 View into the marquee 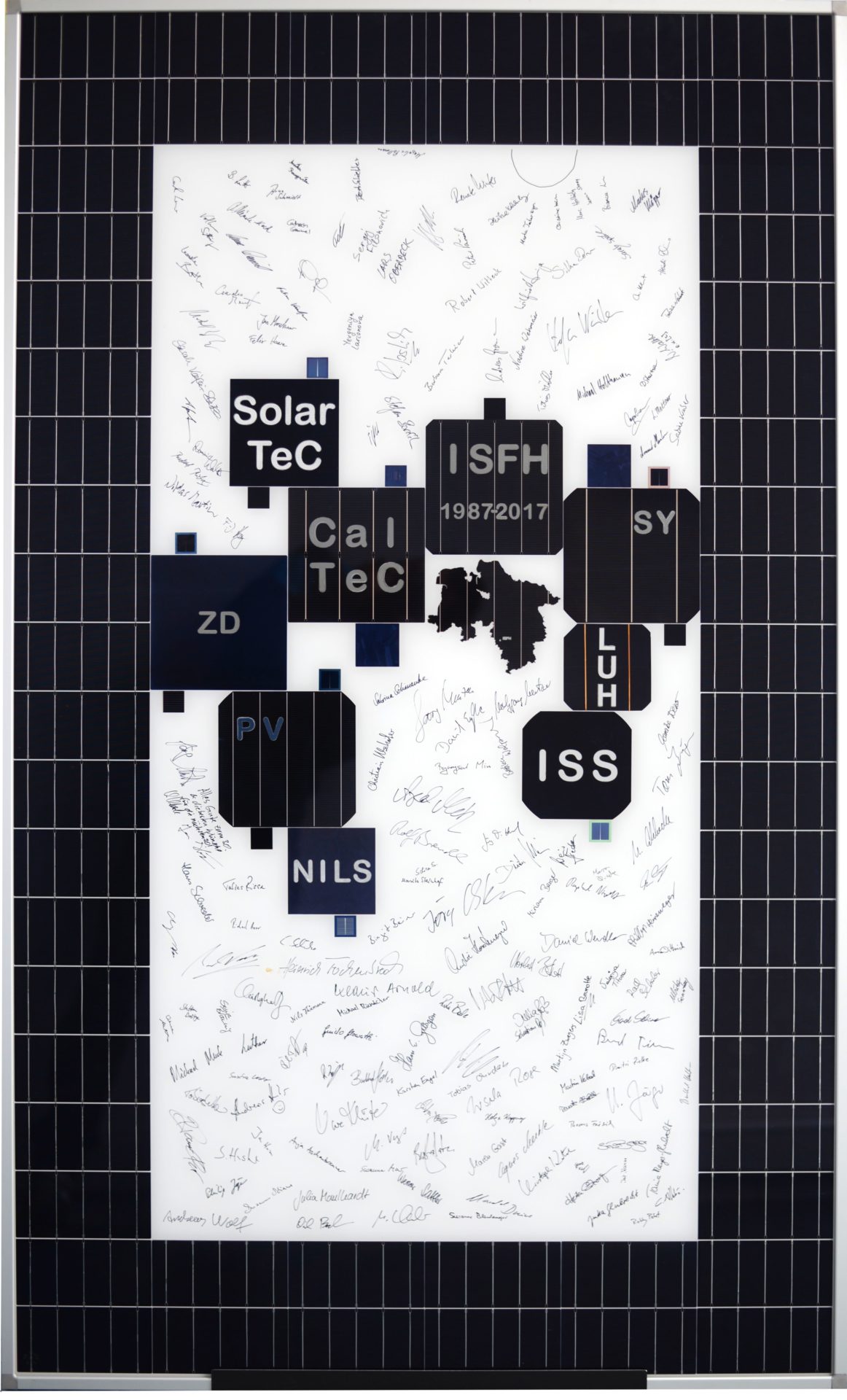 Special guestbook: PV module with solar cells developed at ISFH and signatures from the guests
Emmerthal (RBR, RNi, RGo). Around 250 guests from Germany and abroad were present when the Institute for Solar Energy Research (ISFH) looked back on three decades of successful research work in the Weserbergland region.

ISFH, an affiliated institute of the Leibniz Universität Hannover, has been researching and developing in close cooperation with many companies in the fields of photovoltaics, solar thermal energy and energy systems for more than 30 years. Prof. Dr. Rolf Brendel, head of the institute, explains: “Gaining knowledge, promoting the economy and education for solar energy – these are the objectives that ISFH has consistently pursued since its foundation.”

The implementation of the research results in practice is the main objective of the 150 ISFH employees from the Weserbergland region. “Almost every modern solar cell that is installed in the world today contains a small piece of ISFH – research and innovation are prerequisites for an affordable energy transition,” says Brendel.

“Research makes an elementary contribution to the success of the energy transition. The 30-year history of ISFH is a special example of this. Its scientists achieve innovative solutions in solar energy research,” said Lower Saxony’s Science Minister Heinen-Kljajic, praising the institute in her welcoming address. “The government of Lower Saxony has put energy research at the centre of its funding policy and continues to focus on its expansion.”

The research results of the institute fill not only roofs but also many scientific publications, of which ISFH publishes about 100 per year. Numerous awards and distinctions are testimony to the successful research and development as well as training of new talent. Only recently, ISFH was awarded a prize for “FLOIS”, a new analysis method for module damage and its causes. Other recent examples include the “Walter Reis Innovation Award for Robotics” in 2008, the “Kaiser Friedrich Research Award” in 2013 and the “enercity-Energie-Efficiency Award” in 2015, as well as many awards for young scientists who have been trained at ISFH, including the “Junior Einstein Award” in 2012 and 2016, and the “Green-Photonics-Nachwuchspreis.

The research topics of the institute have been in constant change since its foundation, as the use of solar energy continues to develop rapidly. The laboratory infrastructure is therefore constantly being modified and expanded. The latest addition is ISFH CalTeC, a certified testing laboratory for the precise measurement of solar cells, sensors and spectrometers, which was opened in 2016. Such measurements can only be carried out by very few laboratories worldwide.

ISFH’s history began with founding director Professor Hellmut Glubrecht, who headed the institute from 1987 to 1988 and began research into solar thermal energy at its founding location near the University of Hanover. He was followed by Professor Rüdiger Memming, Professor Joachim Luther and then Professor Rudolf Hezel, who established the photovoltaic research at ISFH in the new building in Emmerthal, which was built in 1993. Since 2004, Professor Rolf Brendel has been the head of the solar researchers at the Ohrberg.

The institute’s successful work would not have been possible without continuous public funding. “The 30 years of continuous support by the state is the backbone of ISFH. That is why the increase in funding since 2017 is extremely important for the future of the institute. It is also a good sign, because the energy transition urgently needs more solar energy. Solar energy is still a much underestimated power today,” says Brendel. Another important pillar is the funding of research projects of ISFH and its industrial partners by the Federal Government and the EU. “We are very grateful for this too,” says Brendel. In 2016, ISFH’s third-party funding ratio was 77%. Approximately three-quarters of the research work carried out over the last five years has been carried out in cooperation with industrial partners.

After the ceremony, ISFH staff members presented their guests from politics, business and science the latest research results in a poster exhibition and in lectures. Interested guests were guided through ISFH laboratories and were able to get a vivid picture of modern solar research directly on site.