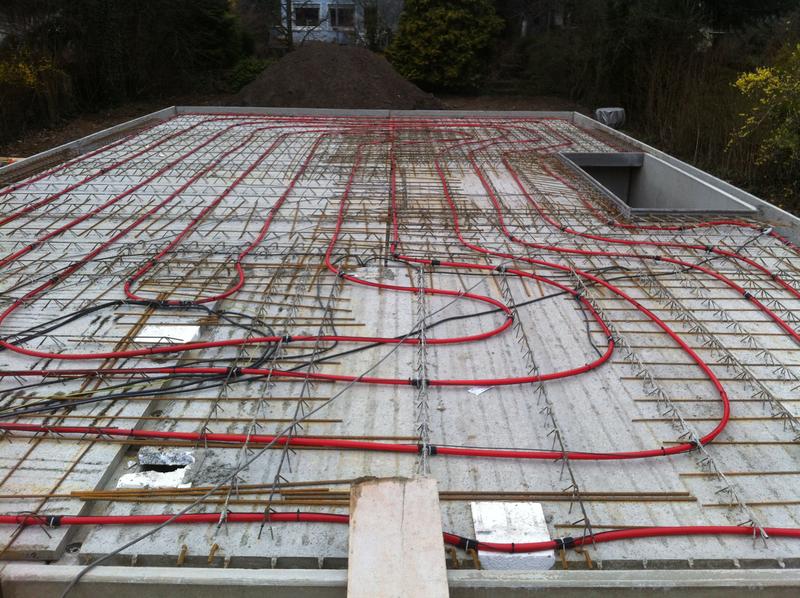 Installation of the thermal activation into the ceiling between cellar and ground floor in the prototype building. 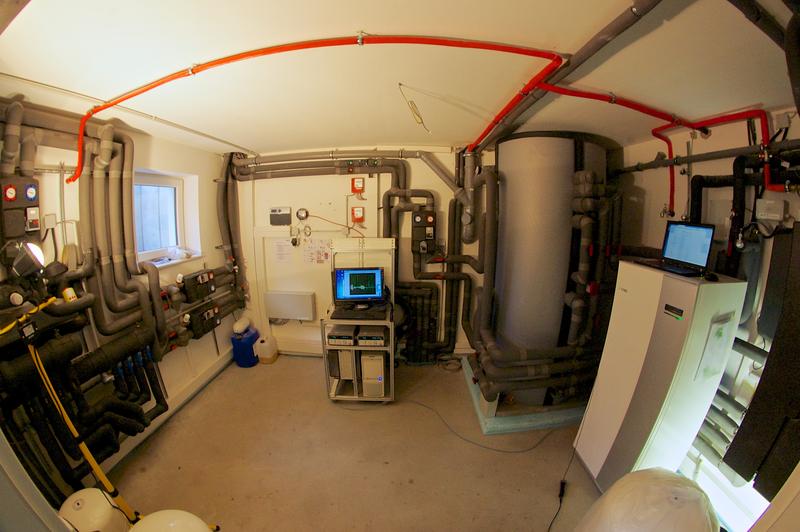 Heating room with measurement equipment (in the center), heat pump and buffer storage

The Institute for Solar Energy Research (ISFH) has successfully tested a new innovative concept for a solar house on a building near Hanover. In the first two years of practical operation, an average of more than 40 % of the space heating requirement could be covered directly by solar thermal component activation. The low operating temperatures of the thermal component activation allow for a 20% increase in solar thermal yield compared to a conventional solar house, especially in winter. According to calculations by the project partner, HELMA Eigenheimbau AG, the new concept is up to 35% cheaper than previous solar houses, as both the operating and investment costs of the new building concept are lower. The complete heat supply of the building requires less than 8 kWh of electricity per square metre of usable space.

Since the end of 2011, the ISFH, associated with “Leibniz Universität Hannover”, has been working together with the companies HELMA Eigenheimbau AG in Lehrte and RESOL Elektronische Regelungen GmbH in Hattingen on the development of a new, cost-efficient concept for solar houses. These are buildings with a high insulation standard and more than 50% solar heat supply. The new concept consists of a combination of a small heat storage tank with only one cubic metre of water and direct solar thermal activation of the building components. Previous concepts use a large central storage tank with several cubic meters of water. These systems not only take up a lot of space, they also cost a lot of money and can easily overheat the house in summer. The smaller heat accumulator in the new solar house concept has lower costs and provides more comfort during the warm season (no overheating of the building). Instead of a customary wood stove, a heat pump with a small geothermal source serves as a secondary heating system for days with little sunshine.

The synergetic connection of the geothermal heat source and solar collectors not only avoids summer collector stagnation (overheating) but also makes the heat pump more efficient. The geothermal energy source is regenerated by excess heat from the solar collectors and can therefore be reduced by three quarters compared to conventional size. This means that the concept also works for houses with smaller gardens. Despite the small geothermal heat source, the remaining electricity consumption is low. The energy requirement of 8 kWh/a/m² for the heat supply of the building is significantly lower than the passive house specification of 15 kWh/m²/a.

The researchers presented the results of a research project on this topic during a two-day workshop. The project funded by the German Federal Ministry of Economics and Energy as of the end of 2015 under the support codes 0325559 and 0325981A, respectively, has now ended. The project has been funded by the the Federal Ministry of Economics and Energy based on a resolution of the German Bundestag.